Grasslands spashed with flowers, domain of the condor, the wind and the cold. Rugged foothills that lie behind the fog, a universe of orchids that grow on the trees of the cloud forest. Lowlands crisscrossed by rivers and populated by ancient trees. Cotacachi-Cayapas, its name alone already gives us an idea of the great variety of altitudinal climates that are contained and protected by this reserve: from the rocky summit, sometimes covered in snow, of the Cotacachi volcano at 4,939 meters on the western Andean mountain range, to the tropical rainforest on the lowlands at the shoreline of the Cayapas river. This great altitudinal climate is due to its location and size, and make Cotacachi-Cayapas one of the protected areas that houses the biggest range of ecosystem types. Very high up on the mountain range we find moorlands and sandy areas of the Cotacachi volcano; then come the mountain slope forests on the pacific side, with its great diversity and complexity; a little further down we find the exuberant rainforests of the pacific coast.

From Quito. Take Panamericana Norte to reach the ciry of Cotacachi. From here you continue for 12 kilometers until you reach the Cuicocha lagoon.

From Quito. You must reach the town of Borbon, in the Esmeralda province. The shortest route is Quito-Ibarra-San Lorenzo-Borbon.

From Borbon. From here we start to reach the two towns closest to the reserve: San Miguel (four hour boat ride through Cayapas River) or Playa de Oro (you arrive to the town of Selva Alegre, on the banks of Santiago and from here you navigate for an hour). 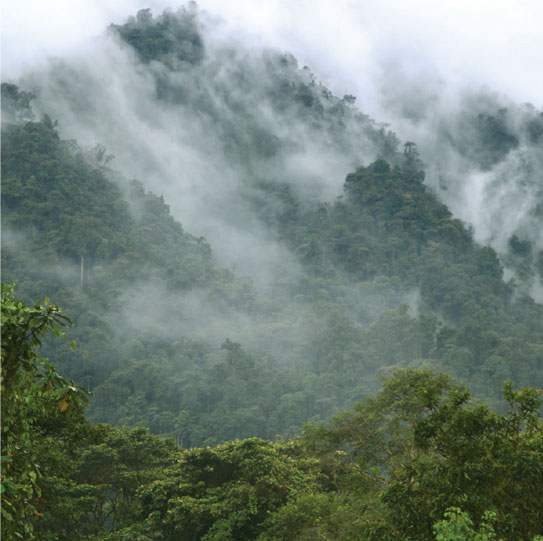 The topography of the reserve is marked by the Cotacachi volcano, whose western ridges are very rugged. Here we find the Toisan mountain range, a particularly rough and hilly area of the north Andes. Cradled by cloudy forest in its hillsides, many rivers are born that will later feed the watersheds of Santiago, Cayapas, Guayllabamba, Esmeraldas and Mira. The main rivers within the reserve are the Puniyacu, Agua Clara, Barbudo, and Piedras rivers. The scenery is completed with the lagoons of the high areas, including Cuicocha, which is one of the most visited attractions of Ecuador. A notable aspect of the reserve´s geology has to do with the volcano´s last eruption: the expelled magma found a lateral exit, which ended up forming a small volcano, the Cuicocha. When the lava withdrew, the magma chamber collapsed and the crater was formed, that after being filled with water is what we can see and admire now. The two islets that exist in its interior (Teodoro Wold and Yerovi) are the result of a subsequent eruption within the cauldron. 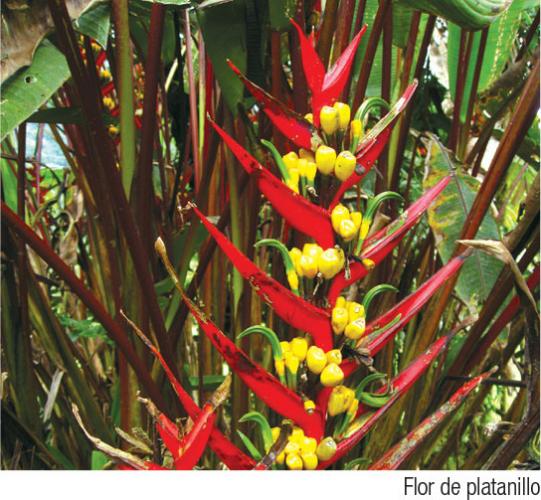 The high area has an interpretation center next to Cuicocha, the camping and lodging sites are the following:

Ruta Sagrada is found next to the Cuicocha lagoon and has an extension of 320 meters. It runs through four stations that represent various aspects of the Andean cosmovision.

Gorky Campuzano. Surrounds the Cuicocha lagoon, and has a total length of 10 km. There are several options or routes for hiking it.

Cerro Cotacachi: is a 14 kilometer trail from the checkpoint to the antena´s area, it is an advance difficulty trail and requires the support of a mountain tour guide.

Playa de Oro (Golden Beach) Community. There are several trails through the tropical rain forest offered by the community. 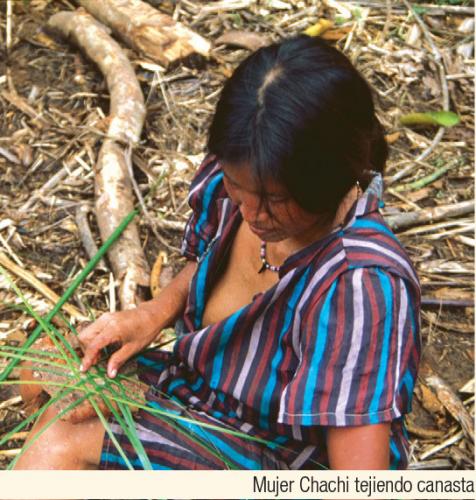 The great ecological variety also has a great impact on the culture and history of the area, very different on between the low and high areas. The Andean area where there are several Kichwa nationality communities. The pre-hispanic habitants of the area included several ethnicities that are remembered in some place names. In the low area there are indigenous populations of Awa, Chachi, Epera nationalities as well as afroecuadorian and mestizas. There are ancient and recent settlements of migrants from every corner of the country, which have related differently with the scenery and resources of the protected areas. The original communities settle around the great rivers located within and close to the reserve. The afroesmeraldeño communities integrated later and brought elements unique to their original culture, among which is the marimba music. 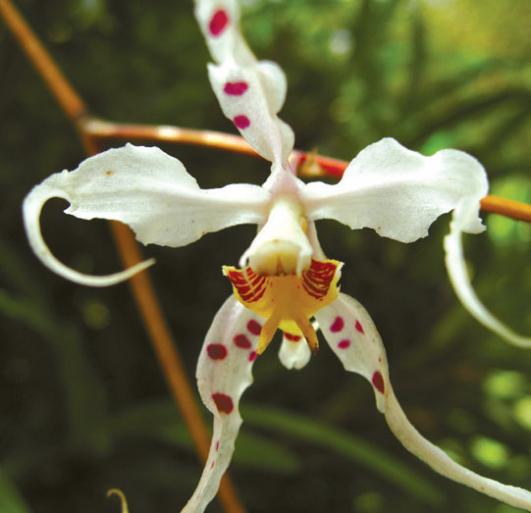 The altitudinal and ecologic variation of the reserve mean an amazing biodiversity from which it is difficult to extract representative elements. Nevertheless, we present an attempt to review the most interesting species. In the reserve there are 2,107 plant species, of which 201 are orchids. In the high areas there are grass moorlands and paper trees or yahual woodlands. In the Andean forests there are alder, bayberry, aguacatillo, and Cuicoccha piquil. In the tropical forest there are chipero, lignum vitae, monkey saltshaker, chanul, a relative of cherimoya, anthuriums or cartidges, bromelias and gian leeches. The reserve has 139 mammal species, 689 of birds (which makes it the richest protected bird area of Ecuador), 111 reptiles, and 124 amphibians. Within its rivers and lagoons there are 39 fish species, of which seven are used by the people that live in the low areas of the Santiago and Cayapas rivers.

In the high area there are moorland wolves, goat-stag, white tail deer, pumas, bunnies, chucuri or Andean bear. In the lagoons such as Cuicocha and Piñan you can see several species of ducks, coots silver diver. In the moorlands we see birds flying such as Andean condor, and the Andean seagull. There are lizards, In the Andean and cloud forests there are jambato frogs, cutines frogs and marsupial frogs. Among the birds there are several hummingbirds, Andean tucanes, and wild turkeys among many others.

In the low area there are spider monkeys, coastal howler monkey, and capuchin monkey, additional to the peccaries, ocelots, jaguars, sloths, and otters. Birds include la arpia, laughing falcon, parrots, turkeys, macaws, Choco´s tucan and the umbrella bird. Amphibians include tree frogs, glass frogs, jambatos frogs, cutin frogs and geckos. In the lower area there are also lizards and snakes such as the as chonta, fake coral and coral snake. 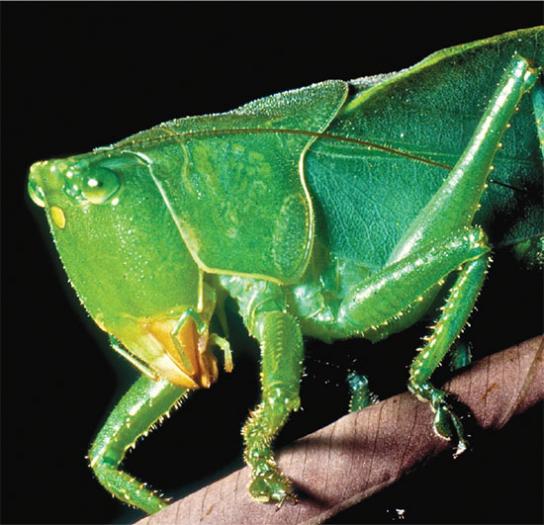 It has a height of 4,939 meters and it is the highest point of the reserve. It has a conic shape and is occasionally covered in snow.

To the west of the Yanahurco hill you´ll find the town of Piñan, with its moorlands and lagoons, within which we find Donoso, Jaricocha, and Cristococha. The lagoons are surrounded by moorlands within which trout fishing is practiced.

You´ll be able to explore the Choco rain forest and navigate the rivers that are found in this area are the reserve´s main attractions. The places to visit are located in the town of San Miguel (navigating Cayapas River). From here you arrive to Charco Vicente, San Miguel waterfall, and to the Bravo river jump. If you take the Santiago River, on the other hand, you will arrive to the afroesmeraldeño community Playa de Oro in the buffer zone of the reserve. 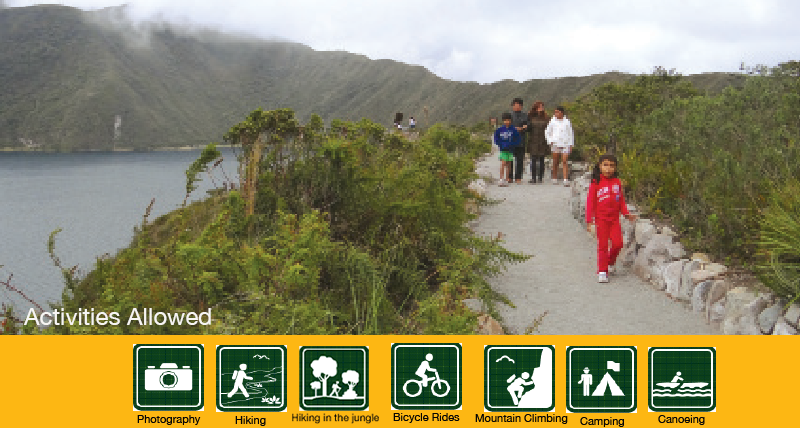 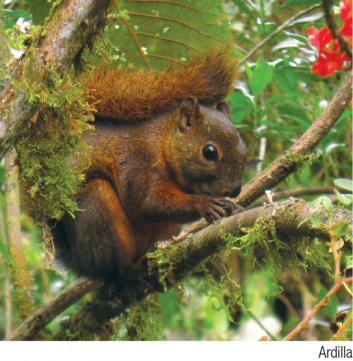 Lower Area: light clothes, and rubber boots to walk on the trails of the area.