In the Gulf of Guayaquil, freshwater rivers that descend from the mountains converge with the salt water from the sea; together they form the largest estuary of the Pacific coast of South America, where you'll find the largest area of mangroves in Ecuador's estuaries.

Towards the south of the region are the Churute mangroves, Ecuador's first protected mangrove area.

Besides the mangroves, the reserve also protects arid ecosystems and cloud forest ecosystems located in the hills of the Cordillera Churute.

The reserve is home to  many wildlife species, some endangered such as as the Canclón, an aquatic bird that lives in a lake of the same name, and a coastal crocodile, which has already disappeared in other parts of the coast.

Because of the diversity and the expanse of wetlands that the reserve protects,  the reserve in 1990 was declared a Ramsar site, an internationally recognized wetland of importance.

From Guayaquil, follow the Guayaquil - Machala road until km 49, where you'll find the administrative offices. To arrive by bus you can take several cooperatives from the bus station in Guayaquil.

Km 49 of Guayaquil -. Machala road, Guayas Province.
For more information contact the offices of the Provincial Directorate of Environment 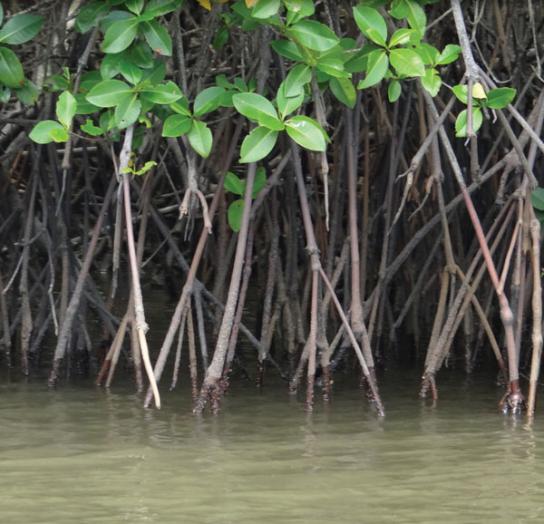 Churute mangroves is located on the western bank of the Guayas River estuary, as it flows into the Gulf of Guayaquil.

The northern border of the reserve is located approximately 15 kilometres to the south of Guayaquil and Duran. It has an area of 49, 389 hectares, making it one of the  biggest marine-coastal reserves in the country. The area includes six islands: Matorrillos, Los Ingleses, Los Alamos, Malabrigo, Cabeza de Mate and Churutillo.

This reserve contains a range of different ecosystems: mangroves - thousands of hectares of them; floodplains; a lot of marshes and inlets; freshwater lagoon The Canclón, and several hills belonging to the Churute mountain range which climb up to 680 metres above  sea level. 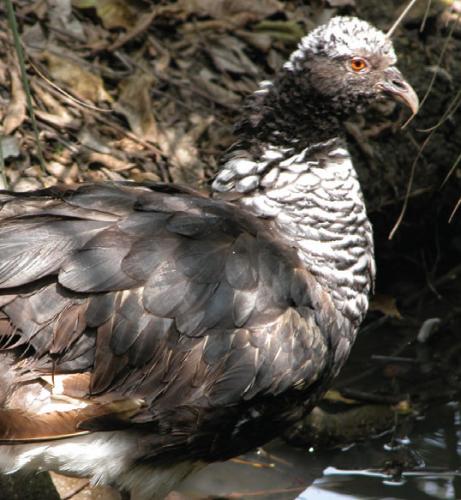 At the office area, there is a  camping spot and cottage where you can stay stay, and a picnic area too. Any of the trails that are longer than one kilometre require the assistance of a Guide. The trails and paths as follows:

Canclón lagoon. This trail is one km long and leaves from the administrative area to the Canclón lagoon, where you can look at the native flora and fauna, and the pretty views around the lagoon.

La Flora. Walk 300 metres from La Flora port to the dock, where the you can look at the mangrove forest find burrowing crabs and birds of the riverbanks too. It is a low difficulty route that ends at the interpretation stall.

El Mirador. This is a 600 metre track that takes you to see the hills of Churute lagoon, The Canclón and agricultural activities of the enclosure El Mirador, from a height of 70 metres.

Aulladores. This involves 1.4 kilometres walk of medium difficulty through the tropical arid forest and you can see the area's native monkeys and birds.

El Mate is a 2.6 km trail of medium difficulty. You go from arid to cloud forest, reaching a height of 340 m. During the trip you can observe several species of birds, squirrels and Howler monkeys .

Ulpiano river route is a one hour trip where you will see plenty of birds, different species of mangrove and artisanal fishing activities. 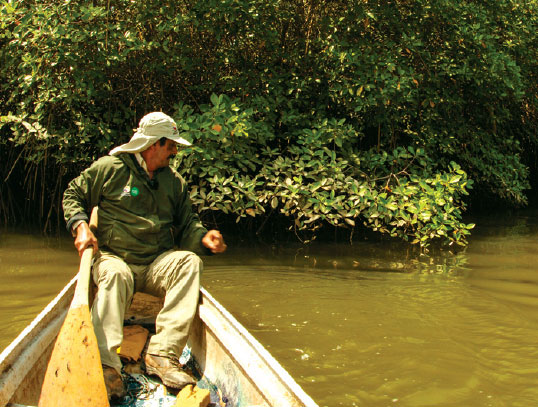 The reserve has a long history of human settlement; The Valdivia, Chorrera, Guangala, Jambelí, Guayaquil and Milagro cultures populated the area over 4,000 years ago.

They found several archaeological remains and left camellones and tolas in the plains and hillsides and at El Canclón lagoon.

Los camellones are raised like furrows built on flood-prone land in order to be able to grow things on them. The tolas are mounds that were used as tombs or base housing, and for ceremonies or checkpoints.

Inside of the Churute Mangroves there are 11 communities that were already present when it became into protect the area; their rights have been respected. Its inhabitants are mainly engaged in agriculture, fishing and catching shellfish, especially red or guariche crab; these activities take place in established areas and in coordination with the reserve management.

Becuase of its proximity to the city of Guayaquil and the existence of trails and watertours the reserve has increased visits to this protected area, also benefiting local people who offer various services for visitors. 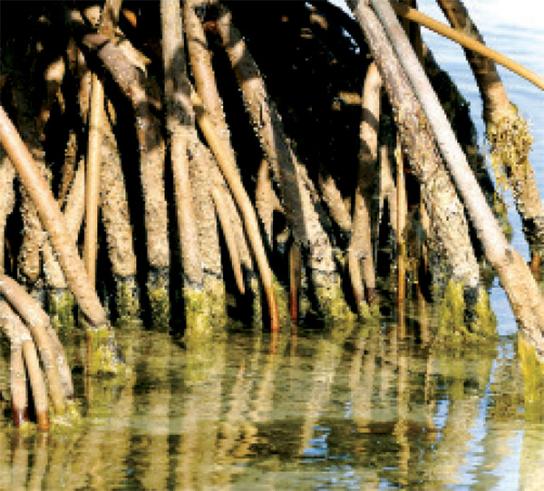 The main ecosystem that the reserve protects is the mangrove, which covers 60% of the reserve

As in other areas, the red mangrove, characterized by its large aerial roots, is the most abundant. In areas of the mainland and towards the top of the adjacent hills are the dry forests of this part of the coast, where you'll find trees such as the guayacán, the tagua, the moral bobo and the palosanto. As a reserve that protects a large wetland area, there is a great diversity of fish and shellfish. Among the latter there are red crabs, crabs, local concha prieta (brown molluscs), mussels and oysters. There is masses of birdlife; more than 300 species, including aquatic birds such as herons, cormorants and ibis as well as migratory birds like curlews and plovers that during the cold winter season in the northern hemisphere, who come to the area where it is easier to get food and shelter.

Dry forests birds are also present in the reserve, some of which are restricted to this ecosystem distribution.

In temrs of mammals you might see bats, opossums, raccoons sloths and crab-eating racoons. It is also one of the few places of the Gulf where big and endangered animals like  jaguars, ocelots, howler monkeys, wild boar, crocodiles and alligators can be found. 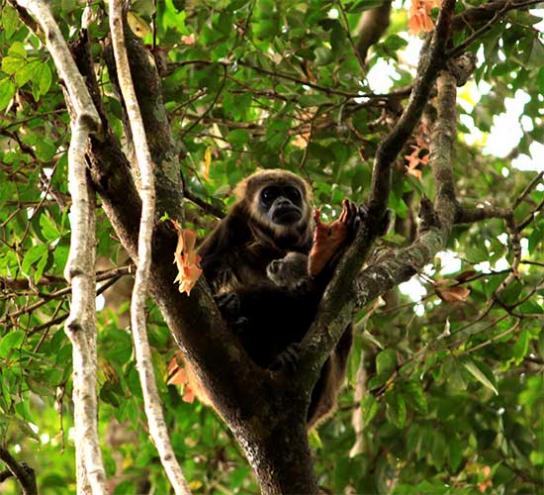 This is one of the most important areas of the reserve due to the amount of waterfowl that inhabit the site. The lagoon ecosystem is different to others that have saltier waters; the visit to the lagoon is an opportunity to compare the differences between the dry mangrove forest environment andmore typical shoreline mangrove systems. In the lagoon there is also a Canclon colony, which is the bird the reserve is named after.

Flora and fauna of the mangrove

There is an extensive network of trails and water routes of various lengths and durations. These trails, some of which require naturalist guides licensed by the Ministry of Environment, allow you to see the flora and fauna of the area, especially the types of mangrove forest and many birds.

Ascending to the hills of the Churute Cordillera you can observe different types of forest.  To southwest of the reserve is the Cerro El Mate, which has a path through scrub, dry forest and rainforest. The fauna of this area include hawks, squirrels and howler monkeys. To the northwest is the hill Pancho Diablo, which is just rainforest.

Here you can do a river trip through three estuaries and finish up at the island Los Ingleses. This tour allows you to observe waterfowl colonies that inhabit the mangroves; between May and August you can also find dolphins that frequent these waters. 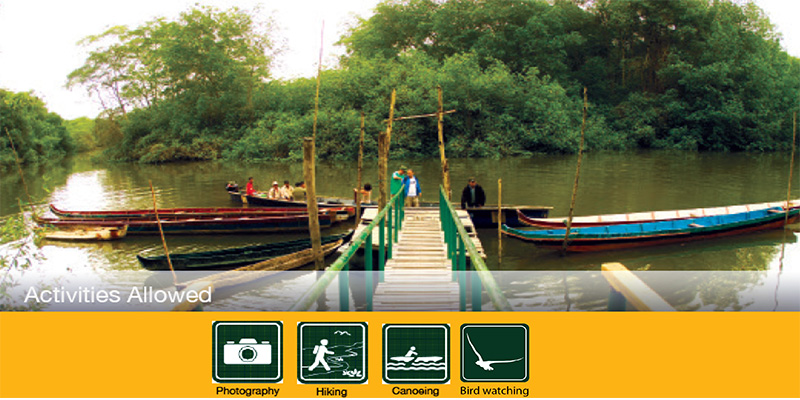 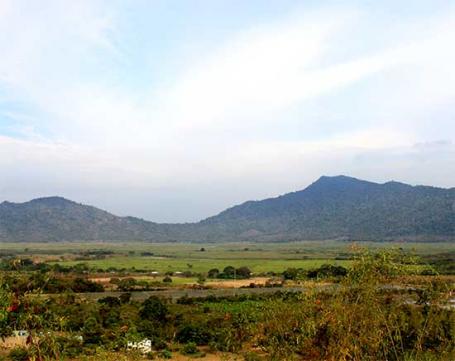 Clothing: Light clothes and rubber boots to walk in the paths of the area.