The refuge protects a unique forest patch in the inter-Andean alley that thanks to its difficult access (within the crater) has been saved from destruction. Here you can do both an extreme adventure excursion, as well as a quiet hike that allows you to enjoy de Andean biodiversity. You can climb the rocky volcano or hike through the comfortable trails that are thoroughly marked, and spend the night on the camping site.

Take the highway to Los Chillos valley and continue on the road to San Rafael-Amaguaña (31 km). Go past Amaguaña and in the El Ejido de Amaguaña community (1 km) you take a left and then a right through the stone paved road next to Iglesia de la Comuna, keep going for 6 kilometers; go past the San Pedro de Pilopata community until you reach the parking area of the refuge. 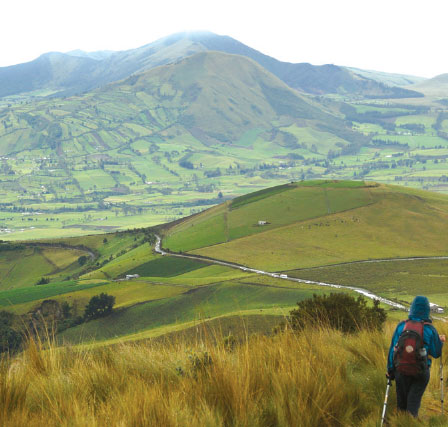 Pasochoa is an extinct volcano. One of its unique characteristics is that it is partially isolated within the inter-Andean valley; it is practically in the middle of Machachi valley, surrounded by extensive livestock and agricultural fields. Its location in the midst of a populated area also allows it to be observed from several sites. From the west you can see its collapsed crater, covered by a dense forest, and from the eastern slopes its steep cliffs are evident. 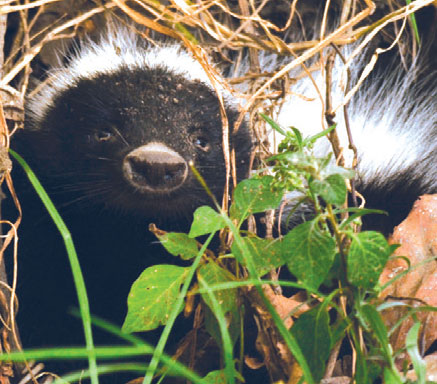 The Center of Environmental Education is located on the entrance, along with administration offices, camping and picnic areas. There are six trails:

Del Colibri. This is a 900 meter trail that is self-guided thanks to its signage.

Amiga Naturaleza. This is a self-guided trail of 1 kilometer across the cloud forest. Medium difficulty.

Bosque para Todos. This is a 2 kilometer trail that runs through the cloud forest; starts on the Colibri trail and ends in the Amiga Naturaleza trail. Medium difficulty.

Mayguayacu. This is a 3.5 kilometer circuit type trail. Starts in the cloud forest and leads to the evergreen forest. Medium difficulty.

Palma de Cera. This is an 8 kilometer trail that runs from the Mayguayacu trail to Los Pantzas trail. Advanced difficulty.

Las Pantzas. This trail leads to the Pasochoa summit; it is of advanced difficulty and requires you to be accompanied by a group tour guide. It runs through the moorlands and the Polylepis forest and reaches the summit. 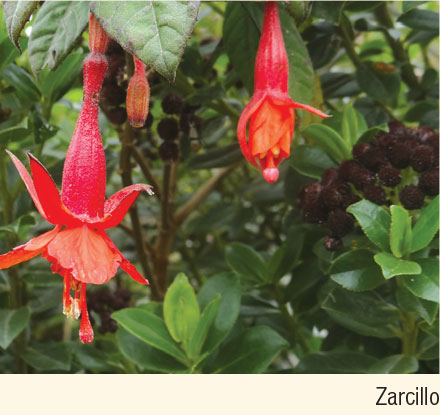 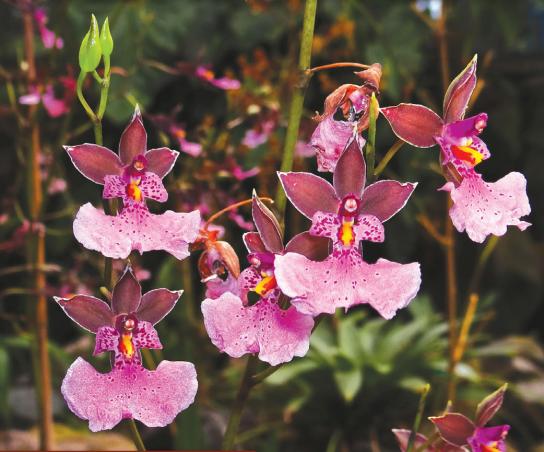 The Andean forest of the cauldron is the last relic of the ancient forest of the area of Uyumbicho, described by the Spaniard conquistadors in the following manner: “a sea of trees extends between the knot of Tiopullo, the areas of common land to the south of Quito (Guajalo), and the outskirts of the towns of Cumbaya and Tumbaco”. For the XVII century, the majority of the forests had already disappeared, given that the wood of trees such as myrtle, quishuar, cedar, walnut and sisin, among others, was used to heat the homes of Quito: “the mountains of Uyumbicho, from where the supply of this city came from are now cut and removed in such a way that there is not any more wood of importance for such buildings” (Hidalgo Nistri, Fernando. Los antiguos paisajes forestales del Ecuador. Una reconstrucción de sus primeros ecosistemas. Quito, Ediciones Abya-Yala, 1998.)

At the begginings of the twentieth century, the ranches that surrounded Pasochoa´s crater that had also belonged to religious communities, became property of the State, who turned it over to the Health Ministry for its management. Pasochoa owes its declaration as protected area to the Ecuadorian scientist Fernando Ortiz Crespo (1942-2001) and the particular interest that he had in this area; in 1982 realizing the existence of a very special forest within the collapsed crater that required active protection, he proposed that this ministry declare Pasochoa as “Protected Forest”. During almost two decades the area was managed by Fundacion Natura, a private conservation organization.

Hiking through the trails of the forest showcases the vast biodiversity of this refuge: several species of orchids, haycundos and 'paraguas' (unbrella), a plant with huge leaves like an unbrella that grows close to the water. There are also trees like alder, pumamaquis, myrtle, cedrillos and palma de ramos, and shrubs such as zapatitos, colcas and chilcas. In the forest there are also many plants used by human beings as medicine or food: caballo chupa, nettle, yerba mora and tocte. On the high areas we find the grass moorlands mixed with small bushes of rosemary and mortiño. In the most protected areas the famous paper trees or pantzas (polylepis). Even though the refuge covers a small area there are big mammals such as the puma, white-tailed deer and moorland wolves. There are also smaller mammals such as marsupial mice, opossums, bunnies, Andean weasels or chucuris. Pasochoa is a very good site to bird watch, especially hummingbirds such as the pico de espada, rayito de sol brillante and the zamarrito colilargo. You can also observe quilicos, curiquingues, Andean turkeys, woodpeckers, doves, hiracchuros, cotingas crestirrojas and a great variety of tanagers. Among the amphibians there are cristal frogs squatting on the branches of trees, and marsupial frogs, that prefer to live within the bromeliads. 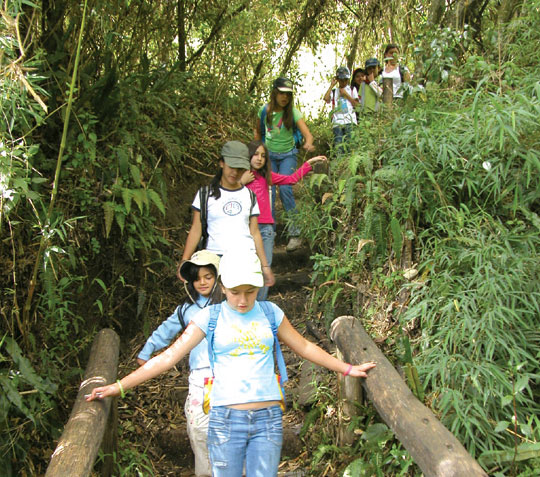 This is an extinct volcano. Its cauldron measures 2 kilometers in diameter and opens up towards the west. It has a semi-circle shape on whose walls grow the Andean forest that is protected by the refuge, among the ravines we have Santa Ana and Sambache. From these heights the waters of San Pedro River form, and they feed the Guayllabamba tributary.

These forests are found between the moorlands and the agricultural areas and urban areas on the lower areas. It is characterized for having fog several hours of the day, even though it not always rains, it maintains an extraordinary humidity. The cloud forests present a complex structure with several levels or floors, all in which the abundance of epiphyte plants, that is to say, those plant that survive on other plants without doing them any harm, stands out. 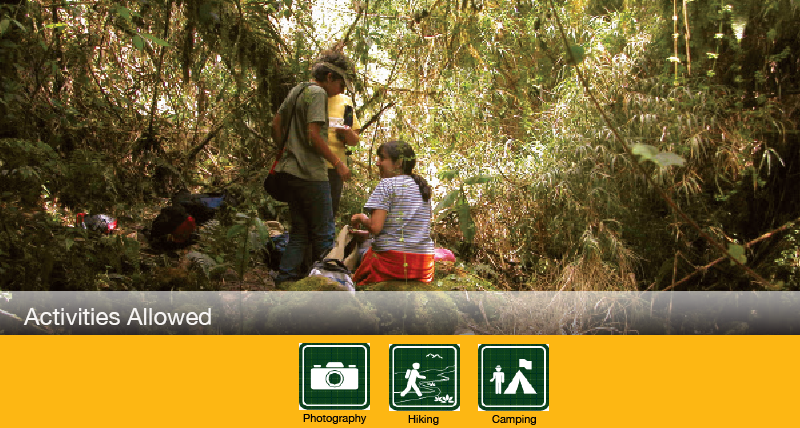 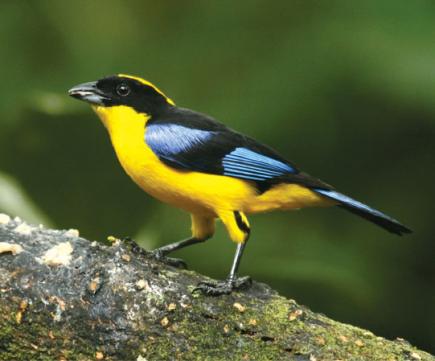