The park's main attractions are its three volcanoes (two of which are active), countless lagoons and lakes with interesting histories (like the one where hundreds of birds flock to die) and enormous levels of biodiversity. The park extends over the eastern mountain range, protecting moors, high-Andean forests and subtropical forests. Due to all this wonderful geography and extraordinary biodiversity, in 1983 UNESCO declared it a World Heritage Site. In the park are the headwaters of Upano, the river that borders the eastern city of Macas and then flows into the Pastaza to the Amazon. The other major river is the Paute, which marks the reserve's southeastern boundary; its flow has been dammed to generate the country's most significant hydroelectric supply. The Paute then flows into the Santiago river in the Amazon.

The mountainous and upper part of the park are inhabited by descendants of the Cañari and Puruhá peoples, and in the jungle are the territories of the Shuar

Natural Heritage (declared by UNESCO in 1983)

From Quito. Take the Panamerican Sur from Quito to Riobamba (194 km). From this city you can access various sites. Atillo. Take the San Luis road to the Guamote - Macas road that leads to the Atillo community (74 km).

Ozogoche.Take the Panamericana Highway to the diversion of Charicando, in the Palmira district (64 km); from there you take paved road 35 kilometers to the "Y" in the Totoras Community.  Here you take an unsealed road to Ozogoche Alto.

The Altar. Take the road to Penipe (22 km) and then continue down an unsealed road to reach the Candelaria parish where you'll find the checkpoint and park entrance.

Camino Del Inca (Inca Trail). Take the Riobamba-El Tambo road. You can get on the trail from the village or from the lagoon Achupallas Culebrillas (to get to this site, start from the town of El Tambo).

Culebrillas lagoon.Take the Panamericana Highway from the city of Riobamba to 2 km before El Tambo. On the left is the entrance to Pillcopata. 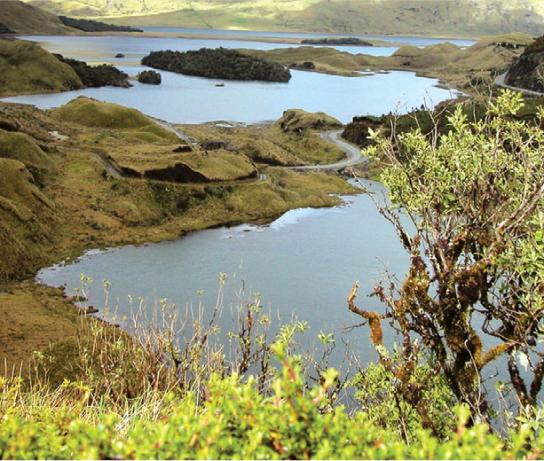 The park is framed by three volcanoes: Sangay (5.230 m), the Altar (5.319 m) and Tungurahua (5,016 m). Perhaps the most striking for its perfect cone is Sangay, the southernmost of the northern volcanic zone and one of the most active in the world. Its last eruption began in 1934 and continues today. Its name comes from Samkay, which in Shuar means  'to frighten or scare'. Tungurahua has been violently erupting since August 1999 and has continued since then to produce strong explosions, pyroclastic flows and lava flows. Tungurahua's name comes from the two Kichwa words 'Tungur'  (throat) and 'rauray' (burning). The Altar is the only one with a name in Spanish, but whose Indian name, Capac Urcu signifies the sublime mountain, which lives up to its beauty; It is the only one that's sleeping. Those who regularly practice climbing or hiking in the Sangay National Park know how rough and wild it is; it has a difficult topography, extremely steep in places, and is surrounded by valleys with steep slopes, abundant rocky hills and many sharp peaks. Despite its demanding challenges, its unique landscape makes it a very attractive place to visit. 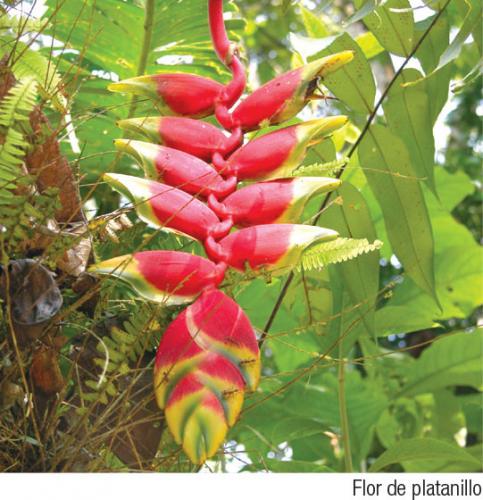 The park has the following paths:

Ozogoche path. Visit the Ozogoche lagoons via this 2 km trail.

Altar Yellow Lagoon. This trail leads to the Altar volcano. There are 12 kilometers of medium to advanced difficulty, depending on whether you want to reach the lagoon or the top of the volcano. For the latter the assistance of a high mountain guide is required.

Qhapaq Ñan. This is an ancient route from the prehispanisc era; it passes through the morrlands and on its route are several archeological sites . Sardinayacu. This is an 8 km trail that can last a whole day, taking you to the natural view of Sangay.

Myrtle Forest. a 3 km trail from the junction of the rivers Upano and Volcan up to the Sardinas River. There you can kayak, fish and do river rafting. 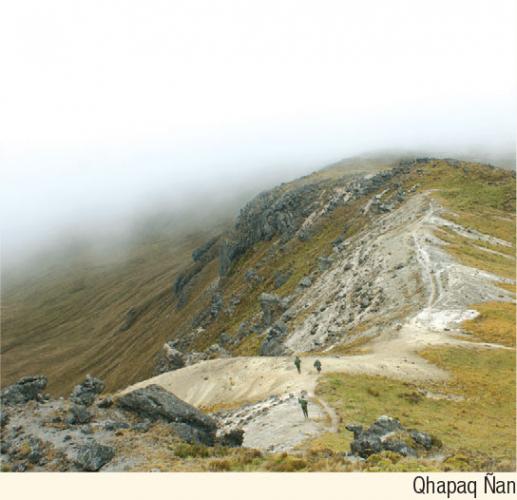 There are pre-Incan and pre-Columbian remains which indicate that this region was inhabited in its eastern parts by the 'guamboyas', 'canelos' and the 'macas', and towards the western side by the puruháes, whose descendants are the current population of  Kichwa speakers from the park's highlands. On arrival of the Incas, the people of the east were not affected, while puruháes had to resist. The Sistema Vial Andino (the Andean Road system)  or Qhapaq Ñan passes through the south of the Achupallas area and enters the park, past Lake Culebrillas, then leaves it again to head towards the ruins of Ingapirca. During the Spanish conquest and colonization, the eastern region was the focus for the search for gold; one of the first cities founded there was named Sevilla del Oro. The Spanish founded cities, year after year, which were then destroyed by indigenous populations. The gold was always there, tempting human greed all over the world. 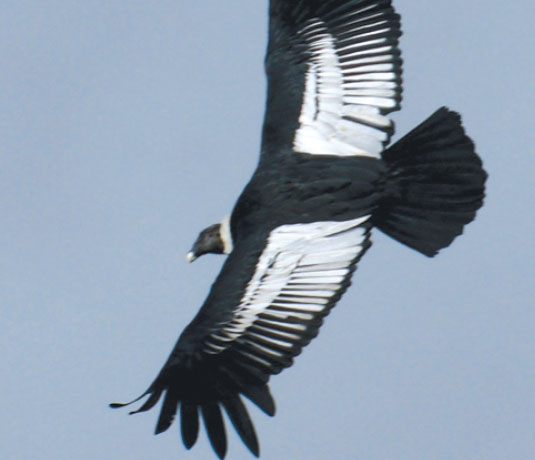 The park is one of the most biodiverse in the country, and although surveys have been done, not all species of flora and fauna are yet known. Geographical conditions created by the presence of three volcanoes in the middle of the forest created several valley floors in the foothills, which favor the diversity of animal species. Faunal diversity is comprised of 107 mammal, 400 bird, 90 amphibian, 26 reptile and 17 fish species, among which are some endemic species such as a guinea pig and a wild Azuay shrew.

There are over 3,000 species of plants of which 586 are unique to the area, including about 250 orchids. The park's vegetation ranges from moorland to subtropical areas, and cloud forests. The lakes of the moorlands host a unique type of fern that grows in the water, as well as other aquatic plants and mosses. The grassy moorland is full of sigses, suros, chuquiraguas, paper trees and kishware. In the cloud forest there mosses, bromelias and orchids covering the trunks of trees such as alder, mountain cedar and romerillos.Shrubs include taruga, the Huagra apple, ibilán and Trinitarian. In the transition zone between the Andean and subtropical forests there guareas, sandallas and tree ferns. In the lower, warmer parts there are cedar, cinchon, guava, apple, and shrubs such as 'beef tongue'.

The park is home to a large population of Andean bears, mountain tapirs, pumas, rabbits, paramo wolves, chucuris, deer and porcupines. In the lower parts there are jaguars, ocelots, spider and woolly monkeys, anteaters and giant armadillos. In terms of birdlife, there are some that are easily spotted such as ducks, coots and gray grebe, and an aquatic bird that swims in the mountain's lagoons. In the forests of the foothills are common guans, tanagers and woodcreepers. In the lower parts there are several species of parrot and parakeet. The park protects several species of tree toads, cutines and marsupial frogs. 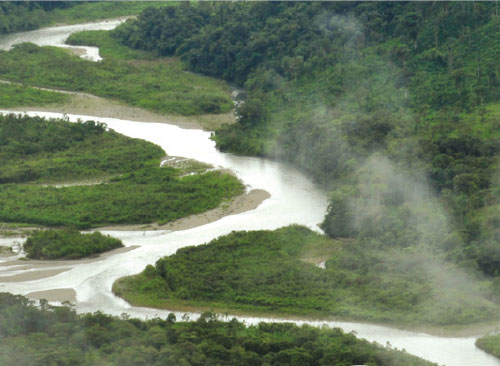 Sangay is perfectly cone-shaped with sparse snow cover; occasionally you will see ash columns coming out of the crater. It can be admired from the moors of Návac or from the heights of Punín, Cacha, Atillo and Ozogoche.

Tungurahua is tapered and is occasionally covered with snow. To admire the lava flows and ash clouds you can go to one of several viewpoints, particularly this in Baños and its surrounding villages.

In the park there are 327 lakes, either solitary or part of a larger lake system. The Atillo system includes Kuyuk Magdalena, Colay, Chapanapungo and Sisñán lagoons. The Ozogoche complex consists Cubillin, Magtayán and other smaller lagoons. The Sardinayacu lagoons are the only surrounded by Andean forest. Every September, the Ozogoche and Atillo lagoons receive the cuviví or plover, a migratory bird in North America. Strangely, it appears to come to die in the lagoons, as a kind of 'mass suicide'.

For many people, this dormant volcano is one of the best scenery in the country, because in his last eruption a huge agora of rocky peaks that open to the west, with very unique church was formed names: El Canon, Los Frailes, the Tabernacle, the nun Menor, La Monja Mayor, the Bishop and the Acolyte. In the bottom of the boiler on the Laguna Yellow descending glaciers formed. 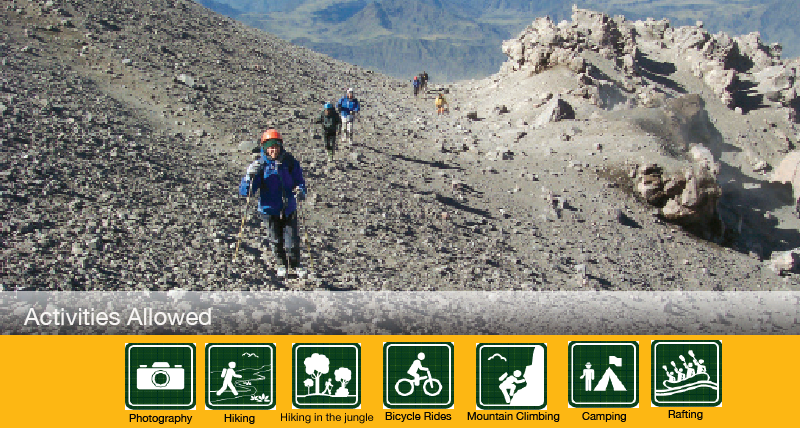 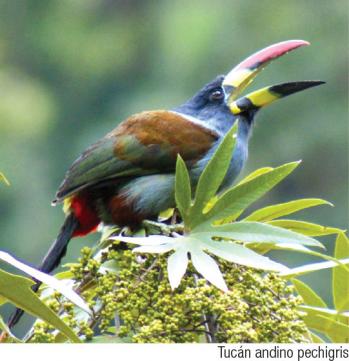