Yasuni, continental Ecuador's largest protected area, is host to impressive levels of biodiversity in the heat of the amazon tropical rain forest and also protects part of the waorani nationality territory. Species records demonstrate this biodiversity for various groups of flora and fauna, species never before registered in any other protected area. Here we find hundreds of tree species, wide rivers that overflow with the torrential rains, and large animals such as the jaguar, anaconda, and harpy eagle. We also find very small animals such as leoncillo or pocket monkey, the smallest primate in the world, and a great variety of reptiles and amphibians that make this park among the most bio-diverse in the world.

The human side of Yasuni is also full of surprises. Dwelling within the park are the tagaeri and taromenane, voluntarily isolated indigenous communities. To protect them and the biodiversity within Yasuni, in 1999 the Tagaeri-Taromenane Intangible Area was created. The National Park Yasuni, the intangible area and the adjacent waorani territory were declared a Biosphere Reserve by UNESCO in 1989.

Biosphere Reserve (Declared by the UNESCO in 1989)

From Quito. By air or land you must arrive to the Puerto Francisco de Orellana city (Coca). From here, depending on your destination, there are several routes, mainly by river. 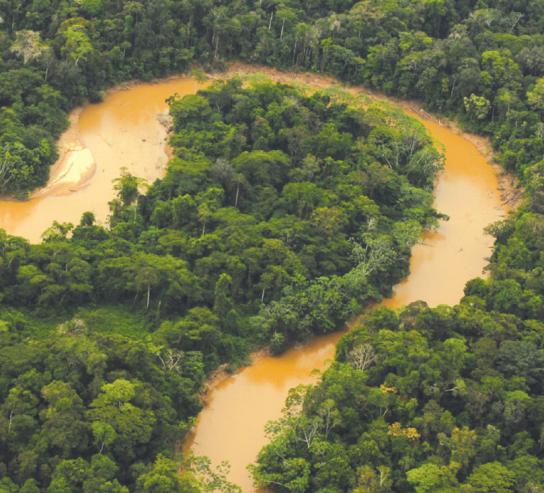 Napo River, one of the main tributaries to the great Amazonas River, flows through the north side of the park, while Curaraylo flows on the southern side. Between both rivers there is a complex network of the rivers Tivacundo, Tiputini, Yasuni, Nashiño, Cononaco, and Tihuino, which make up the lower basin of the Napo. In the midst of this maze of rivers there are more than a million hectares of tropical rainforest that make up this national park.
A birds-eye view of Yasun would reveal its different topographical environments;  in the central and western parts of the park there are wide plains with small hills bordered by medium streams and rivers. The nearby river banks and plains get flooded periodically when the rain intensifies, enriching by the nutrients that the rain brings with it. The hills, on the other hand, are never covered with water, and along with other no-flood areas are covered by land forests. On the other side of the park, close to the border with Peru and where the rivers Yasuni and Tipitini end and flow on into other rivers, the  the soil has low permeability which means that rain water accumulates to form extensive marshes or swamps where morete palms are abundant. 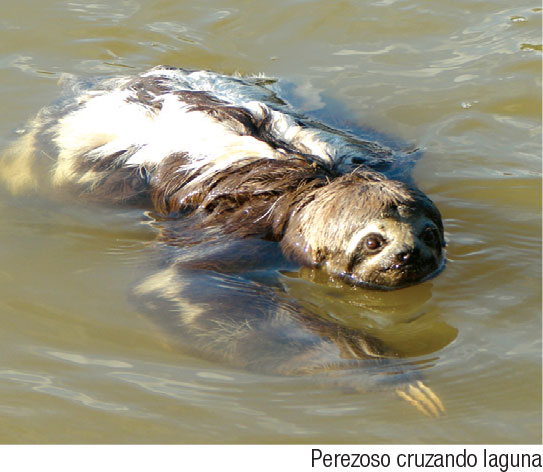 The main facilities to visit are along the Napo River within several kichwa communities: Añangu, Nueva Providencia, Indillama, Llanchana, and Mandaripanga.
You can also visit the Tambococha area where you´ll find a guard booth that belongs to the National Park Yasuni.

Añangu Community
Here you´ll find the Interpretation Center Kuri Muyo, a camping area and cabins.
Mirador Trail. Starts at the guard booth in Añangu and runs for 4 kilometers (both ways). It is an easy trail.
Pericos Trail. A 1 kilometer trail that runs through the tropical rain forest until it reaches the salting or quagmire of pericos. Low difficulty.
Kuri Muyo Trail. This is a 100 kilometer trail that starts at the Interpretation Center Kuri Muyo and reaches the saladeros de perico mirador. Low difficulty.

Indillana Community
There are cabins and trails. Indillama trail. This is a 10 kilometer trail (both ways) in which you´ll get to see the giant kaypok and the tapires salting. Medium difficulty because of its length.

Llanchana Community
Thre are cabins and a trail to the Encantada lagoon (approximately 1 km). 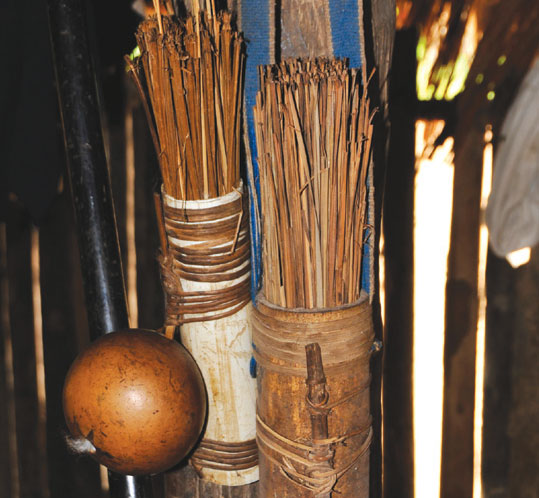 The whole area between the Napo and Curaray rivers was home to hunter-gatherers, seminomadic people related to the waorani culture and tongue. The waorani lived in that area hunting and gathering fruits and keeping small  gardens; in 1969 they were confined and grouped together in an area named a 'protectorate', located on the headwaters of the river Curaray. The clans that did not accept to live in the protectorate or that refused to abandon their way of life formed the beginnings of the Voluntarily Isolated Indigenous Communities. Today, the waorani territory extends into the west side of the park, only covering a small part of their ancient territory, while the north side of Yasuni has been granted to several oil companies. Other people that inhabit this area are the indigenous kichwa people of the Napo River baisin, that are located on the north side of the protected area, and an itinerant population of students and researchers that work in the two scientific stations located within the park and in its buffer zone. 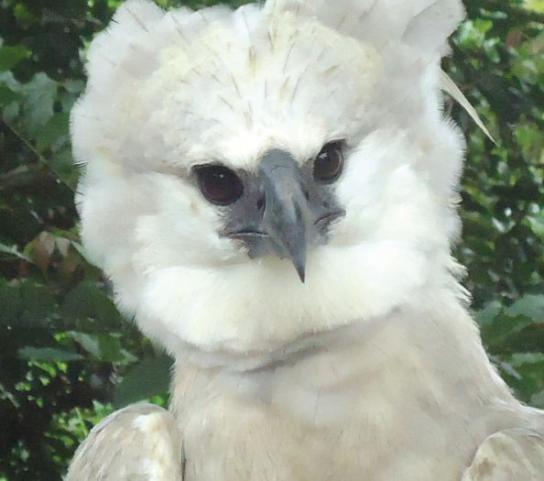 Yasuni is a biodiversity sanctuary. Research conducted in the last decade reflect figures never before registered in any other area of the tropical rainforest, and even though the data might change over time, it gives us an idea of what this national park shelters: more than 2,000 species of trees and shrubbery, 204 mammal species, 610 species of birds, 121 reptile species, 150 amphibian species and more than 250 fish species.
In one hectare of Yasuni, for example, there have been 650 tree species recorded, which represents more than those found in the whole continent of North America.The land forest makes up the main ecosystem of the park. In Yasuni there are trees that can reach the height of 50 meters with trunks of more than 1.5 meters in diameter. Additionally to their extraordinary size, some form enormous roots that open up at their base in a triangle shape; thes include the ceibos, sangres de gallina, and canelos. Other species, of equal or lesser size, grow from these singular roots, such as sangres de drago, cruz caspi, chunchos, and cacaos de monte.Settled amonst these huge trees you'll find a vast range of palm species. Also abundant are chontas, chambrias, ungurahuas, and pambiles.
Yasuni is home to 12 monkey species, ranging from the larger ones such as spider, wooly and howling monkeys, to the smallest in the world that is the leoncillo or mono de bolsillo (pocket monkey). We also have the chichicos bebeleche, named this way because of their habit to suck the sap of certain trees. Other mammals include jaguar, the largest feline in America, and capybara, the largest rodent in the world. There are also pumas, Amazon tapires, ant-eaters, wild boar, and smaller mammals such as deer, tigrillos, guatines, and cusumbos.
The birds are another spectacular group. In large flocks the colorful guacamayos and parrots cross the skies. Among the plant foliage the tucans, sigchas, fly-eaters, woodpeckers, nuthatches, and a variety of hummingbirds. We also find trompeteros and tinamues walking on the ground. On the branches of the shrubbery and of vegetation we find arboreal frogs of an intense green color and with huge eyes; underneath leaves and rocks of the ground, there are the tiny nursing frogs that care for their eggs. On the rivers and lagoons, such as Añangu and Tabococha, live the pink dolphings, small gray dolphins, manatees and giant otters. Close to the water there is an infinity of herons, hoatzines, and cormorants, as well as the charapas turtles. In the rivers you can also observe the giant anaconda and a great variety of fish such as cachamas, paiches, palometas, bocachicos, catfish, shad, and tucanaris. 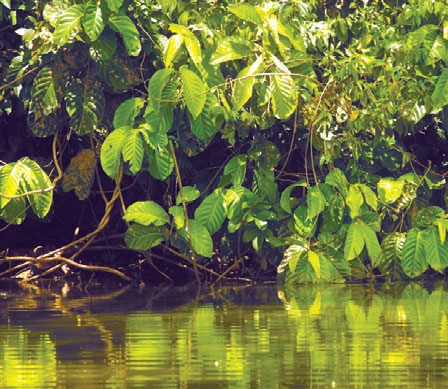 Añangu community and lagoon
This lagoon has dark and peaceful waters, making it look like a mirror. Located in the kichwa community of Añangu, on the north side of the park and on the riverbanks of Napo River. It is possible to navigate the lagoon on canoe, visit the Interpretation Center Kuri Muyo and hike through several trails that run through the tropical rainforest.

Land Forest
The vibrant vegetation that covers the forest makes us think that the Amazon soils have a great layer of fertile soil. In reality, the upper layer is very thin and lacks nutrients: the richness is in the vegetation and a thin stratum formed by leaves, branches, flowers, fruit and crusts that fall and cover the soil. Here we also find  a veritable army of minute proportions that are constantly processing organic matter, which means that nutrients don´t have enough time to accumulate. Nutrients get absorbed by the vegetation which results in the ecosystem's vibrancy. The land forest covers majority of the National Park Yasuni, and can be explored from the settled communities on the riverbanks of the Napo River, such as Añangu, Nueva Providencia, Indillana, Llanchana or Madaripanga.

Tambococha and Jatuncocha lagoon
These two lagoons are found within the park and are accessible from Nuevo Rocafuerte.

Nueva Providencia
In this kichwa community located on the south side of the Napo River we find the Interpretation Center Yaku Kawsay. There is a trail that starts here and runs through the tropical rain forest. 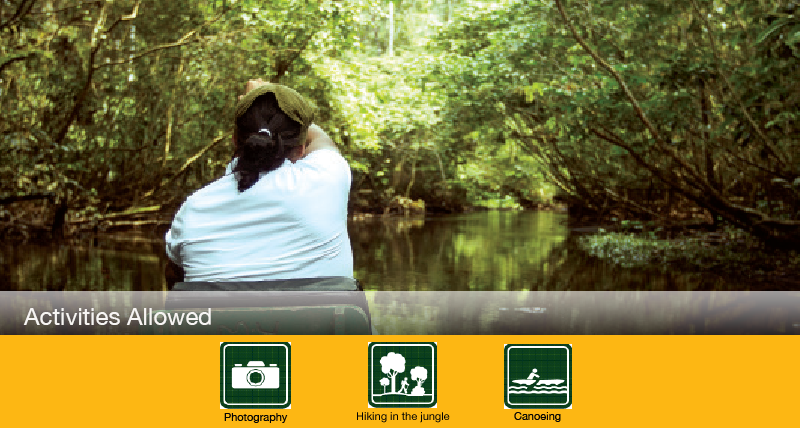 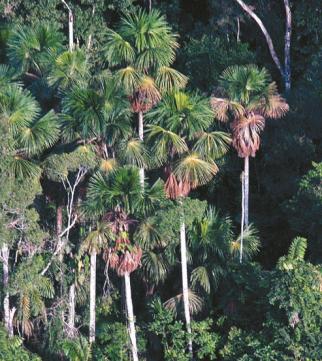 Guidance. The access to the park is only made available with authorized tourism operators that have certified naturalist tour guides.
Vaccines. To enter the park you must have yellow fever and tetanus vaccinations.