100 thousand tourists visited the Protected Areas, at the end of the year 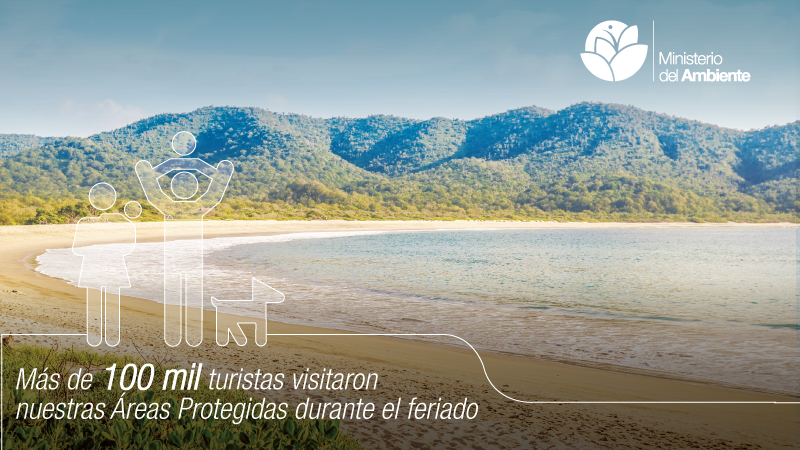 The New Year holiday was an opportunity where more than 100 thousand domestic and foreign tourists took the opportunity to visit the different protected areas of Ecuador, as evidenced by the records of visits to the different natural reserves, distributed in the four regions.

The Costa region, made up of an important variety of spas, mangroves, marshes, estuaries and villages, welcomed a total of 83 531 tourists. Thus, the natural reserve of the Coast with the largest number of visitors was the National Recreation Area Playas Villamil with 66 635 tourists; Followed by the Marina el Pelado Reserve with 5,350 visitors; And the National Recreation Area Isla Santay counted on the presence of 5 022 tourists.

While the Sierra region welcomed 14 147 tourists, who took advantage of this three-day holiday to see snowfalls, moors, ponds and hundreds of animal and plant species that houses this region. The most crowded places in this region were the Cotacachi Cayapas Ecological Reserve with 4,708 visitors; The Cotopaxi National Park with 2 457 tourists; And the Pululahua Geobotanical Reserve with 1,851 people.

The surprising landscapes, rivers, forests, and native species of the Ecuadorian Amazon were the hosts of 2 018 tourists. Finally, 2 258 people entered the protected areas located in the Galapagos Islands, declared Natural Patrimony of the Humanity by their unique ecosystems in the world.

The Ministry of the Environment invites citizens to visit our natural reserves and enjoy the charms that each one has. In addition, it is important to mention that all protected areas, except Galapagos, are open to the public 365 days a year for free.

During 2016, the 10 most visited continental areas within the National System of Protected Areas were: