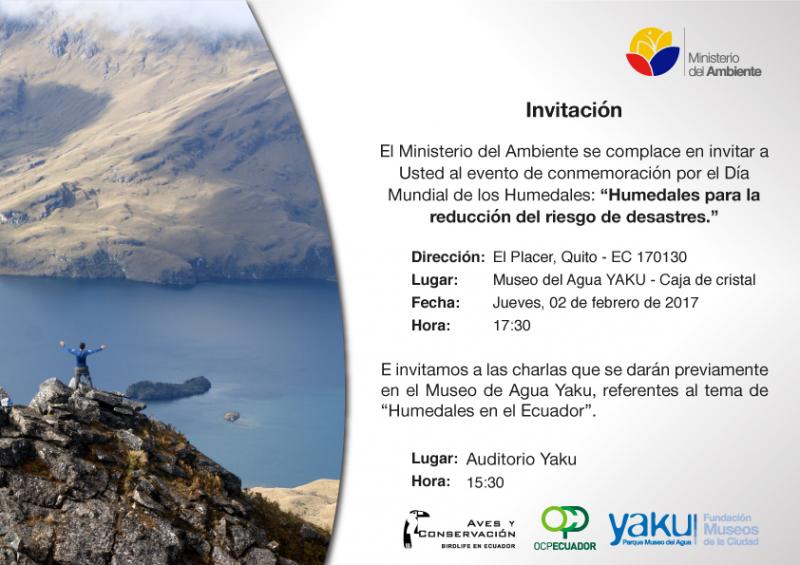 We are close to celebrating World Wetlands Day in commemoration of the Convention on Ramsar Wetlands, which was signed in Iran on February 2, 1971. Ecuador has been a party to this agreement since 7 January 1991, making significant efforts to Commitments to the conservation and wise use of wetlands. These include the designation of sites of international importance, the establishment of the institutional framework responsible for the implementation of the Convention and the design of policies on the conservation and wise use of wetlands. To date the country has designated 18 sites covering about 286,659 ha.

For 2017 it is proposed to carry out a set of activities, within the framework of the Wetlands Implementation Program of the Ministry of the Environment and Birds and Conservation as implementing partner.
On Thursday, February 2, the event will be inaugurated at the Yaku Water Museum, which will be preceded by informative lectures on wetlands, an artistic demonstration and a photographic exhibition.
To this event have been added organizations such as: the Water Protection Fund (FONAG), which has organized a Yaku-Ñan, which consists of a route to raise awareness and awareness among children about the wetlands (Antisana sector) and the Environmental Education Network that will participate in awareness raising for children on the banks of the Machángara River in the area of ​​the Interactive Science Museum (MIC) and these events will be on Friday 3 and Saturday 4 February respectively.